Centopedia is reader-supported. If you buy something through our links, we may earn affiliate commissions at no extra cost to you. Full disclosure... 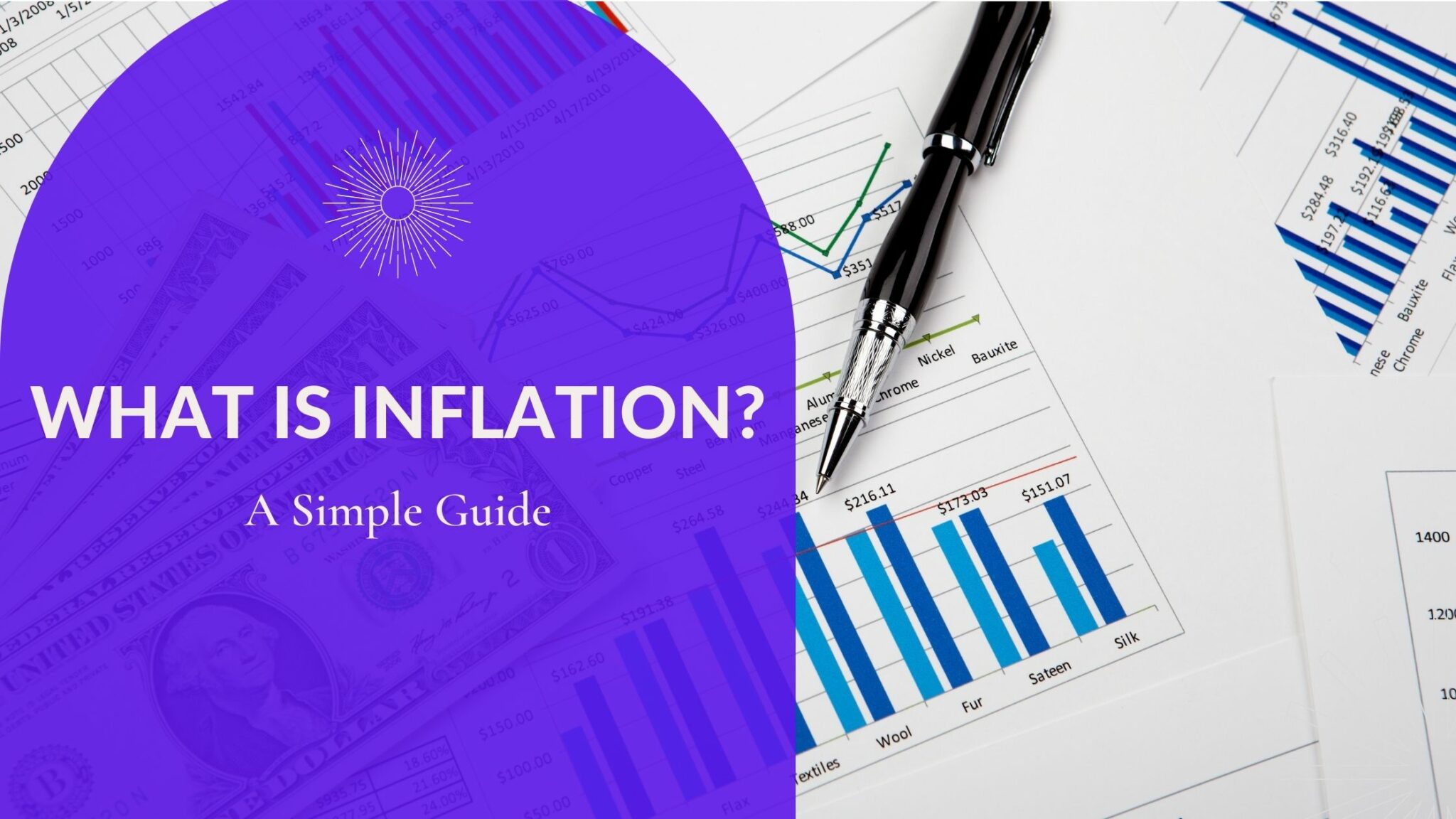 What is inflation in economics?

Inflation is a rise in the prices of goods and services that reduces the purchasing power of money. Inflation also refers to a decrease in the value of a currency. This can be caused by an increase in prices and wages without corresponding increases in productivity or output. A common cause for this situation would be if there was a sudden increase in demand for goods and services (due to population growth or new technology). Prices would rise because producers are trying to make more profit on their products and services.

A Brief Summary of Inflation

#1. Inflation Based on Cause(s)

Built-in inflation is like a ripple effect that often stems from prior inflation. When there is an increase in the prices of goods and services in a society, workers, in turn, will expect an increase in wages and salaries which will, in turn, lead to an overall increase in production costs. Another cycle of inflation sets in, and it spirals downward into a vicious circle.

Wage-induced inflation sets in when workers’ pay and remuneration increase faster than the average cost of living in an economy. Wage inflation is an increase in the cost of labor as a production factor. This happens for three main reasons:

Cost-push inflation results from cost increases in production. It occurs when there is a decrease in the aggregate supply of goods and services because of an increase in the cost of production; this decrease can be due to either increasing resource costs or decreasing productivity.

Demand-pull inflation is the increase in aggregate demand, which is categorized into four sections of the macroeconomy: governments, businesses, households, and foreign buyers.

Asset inflation is characterized by an increase in a specific asset(s) while the inflation rate of other areas of an economy remains relatively stable. Asset inflation has happened throughout history and some notable examples are in the following paragraphs.

It is not an overstatement that gas experiences sharp rises and falls in prices in several parts of the world. This inflationary trend has its causes, no doubt. It can be attributed to tax policies, subsidies, seasonal activities, etc.

For example, in the US, it is common knowledge that gas prices tend to increase each spring. Why is this so? There is an anticipation of the summertime vacation driving season which is the major factor that drives the increase in gas prices during this period.

Gas prices have been reported to reach an all-time high of four dollars and six cents in July 2008 amidst economic uncertainties. Unrest and political strife in petroleum exporting countries often contribute to these hikes in gas prices too.

On September 5, 2011, gold hit an all-time high of one thousand, eight hundred and ninety-five dollars ($1,895) an ounce. At this point, global economic stability looked gloomy. The fate of the dollar and even other major currencies of the world was unknown. Investors started to invest more in gold to hedge against this uncertainty, and this caused a massive spike in the price of gold.

In 2021, as an aftermath of the COVID19 pandemic which disrupted the operations of many sectors, industries, and economies around the world, several nations of the world are now experiencing a surge in food prices.

To complicate matters, there are nations of the world where civil unrest is further fueling the hike in food prices. Take Nigeria as an example with her unending clashes between large-scale farmers and the nomads, popularly called herdsmen.

As we can see, food is fast becoming a rare commodity in regions of the world due to the unforeseen complications of the so-called “Wuhan virus” and civil unrest in nations with a history of instability around the world.

Food inflation can also be caused by natural disasters such as floods, drought, extreme colds, typhoons, insect infestations, plant diseases, and other disastrous occurrences like those. Why is this so? It is because scarcity leads to a lower supply of food items which in turn drives the price up.

Stagflation is a rather feared type of inflation. As you may have guessed Stagflation is a combination of two words which are stagnation and inflation. Stagflation happens when the GDP of a country is steadily declining, there is a high rate of unemployment, and prices of commodities and services continue to rise. This is a rather risky situation for any country to be in.

In other words, stagflation can be defined as a period of retrogressive economic growth accompanied by a steady increase in the rate of unemployment and a decrease in the economic productivity of a nation.

Some theorists postulate that stagflation is caused by supply shock where there is a sudden decrease or increase in supply. This can also be an aftermath of cost-push inflation where an increase in the costs of the factors of production leads to a supply shock.

Other causes of stagflation can be falling productivity of workers, wage-induced inflation as a result of the bargaining power of some labor unions, and a rise in structural unemployment.

The prices of products stay the same but the size of the product is reduced in a period characterized by shrinkflation. This is something that a lot of us are familiar with. Instead of increasing the prices of products which may affect the demand for such products to the negative side, manufacturers opt for reducing the sizes of these products such as the net weight or volume of the products while keeping the price constant.

Imported inflation is inflation due to a reduction in the exchange rate of a national currency against a foreign currency. The price of goods that are being imported will increase as a direct effect of depreciation in the foreign exchange value of the nation’s currency. Exportation is also likely to increase because manufacturers will prefer earning foreign currency because of the higher perceived value, and this will result in an increase in demand and a shortage of supply. That further fuels an ongoing inflationary trend.

#2.  Inflation Based on Employment

(a) True or Pure Inflation

There is an increase in money supply in this type of inflation but no corresponding increase in the supply of goods and services. This happens when every factor of production is fully utilized and the employment rate is at its peak. Since productivity at this level is expected to be at its highest (because of the full employment rate), if there is an increase in the demand for products and services, manufacturers will not be able to meet up. Inflation is inevitable when the supply of products, even at the peak of productivity and employment, cannot match the demand.

Open inflation is when the government of a country does not play an active role in controlling the inflation rate.

There are times when economies experience excessive demand. In most cases, this will lead to an increase in price. To prevent prices from rising, the Government can take repressive measures such as price control, rationing, etc.

#4. Inflation Based on Speed

In the case of walking or moderate inflation, the rise in the price level of goods and services is neither fast nor slow, it is normal. When the price level of goods and services rises steadily like this but does not exceed 10% in a year – it is walking or moderate inflation. Although walking inflation isn’t supposed to cause panic, when the inflation level starts to rise above 4%, a nation’s Central Bank will become more concerned.

This rise in price is at a significant level and it’s usually between a rate of 10-20% a year. Inflation at this level is already a cause for concern because it will most likely have adverse effects on the economy of the nation in terms of cost and uneasiness within the population.

At this level, inflation is already out of control. Some economists would define hyperinflation as inflation characterized by at least 50% growth in price per month, while others would simply say it’s when prices grow by at least 1000% in a year. However you want to look at it, hyperinflation is simply characterized by extremely rapid changes in the prices of goods and services in any economy which are excessive and may be out of control.

There are different causes of hyperinflation, but some of the common ones are excessive money supply, loss of confidence in an economy, goods hoarding, etc.

There are several measures of inflation but two of the major ones are the price index and the personal consumption expenditure index. The price index can be further classified into the following types:

Consumer Price Index (CPI) measures the average change in prices paid by urban consumers for a basket of consumer goods and services over a period of time. Essentially, if prices change, the CPI represents the basket of goods and services a consumer would purchase without making substitutions.

This measure includes a wider variety of goods and services than the CPI, and it is based on a broader range of buyers. It attempts to measure what is actually being purchased, and how consumer behavior can change when relative prices change.

Personal consumption expenditures can be used to measure national consumer spending. This reveals how much money consumers spend on goods and services. There are two subcategories within the goods category: durable and non-durable goods. Lawnmowers and electric cookers are examples of consumer durable goods. Items like toiletries and groceries that households use quickly are non-durable goods.

Measures of inflation can either be in the form of headline or core variations.

In other words, the headline price index measures both temporarily volatile commodities whose prices are prone to change from time to time such as food and energy alongside every other item that typically makes up the contents of a shopping basket of the goods and services a representative household consumes.

This is used to measure the rate of price change of the contents that are typically present in the shopping basket of a representative household over a period excluding relatively volatile commodities like food and energy.

In other words, core inflation eliminates the CPI components that fluctuate a lot from month to month, which can distort the headline figure in an unwanted manner. Food and energy costs are the most commonly removed factors.

Some of the most common causes of inflation are as follows:

How to Calculate Inflation

Inflation as a concept in economics is quite broad, but I hope that you are now familiar with the concept of inflation and that you have gained a better understanding of the topic. There are still loads of things to learn about inflation, and we will cover these in subsequent posts. Till then…

Ssshhh!!! See What People Are Buying!